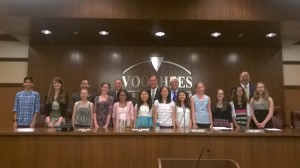 Social studies teacher David Thompson and a group of students started the club only a month ago, and already the club has made significant strides toward its goal.

On May 26, members of the club attended the Voorhees Township Committee meeting to outline the group’s aspirations and get the committee’s blessing on its activities, and the Trailblazers had a meeting scheduled with the township engineer to learn about permit requirements and other parameters the group would have to work within.

According to Thompson, the group’s first goal is to build about a quarter-mile trail from behind Voorhees Middle School to connect to another already established trail in the open public space known as the Stafford Tract, which connects Eastern High School to Evesham Road.

Thompson describes the trail the club hopes to create as one already having been somewhat established as a deer path, so the project would be within the students’ limitations and wouldn’t require the use of heavy machinery such as front loaders and bulldozers.

“It’s a chance for the kids to do something that will benefit their township and change their world a little bit, and it’s something hopefully they’ll be able to look back on in years and say that’s something I did to make my town a little better,” Thompson said.

Thompson said the club started simply from he and his wife starting a walking and hiking regimen, and realizing they had to go to neighboring communities such as Cherry Hill and Gibbsboro to find paths.

When Thompson happened to mention this problem in his class one day, he said he found a lot of students interested in solving the problem, and with an “overwhelming response,” as Thompson describes it, soon a club was formed.

“They are just so excited about this, it’s amazing,” Thompson said. “I’ve been teaching about 11 years, and I’ve run a couple of after-school groups, and I’ve never seen a group as excited as this.”

Thompson said one of the group’s first major actions was going before the Voorhees Township Committee and making the Trailblazers’ case, which Thompson said served the dual purpose of also giving his students a chance to see their local government in action.

“The social studies teacher in me is thinking there was a teachable moment here, so we’ll have to go before the township, and this is a great opportunity for middle school kids to see how their government runs,” Thompson said.

“I think it’s really a testament to the youth in our township that we have kids that have more on their minds than playing video games,” Thompson said. “There are a lot of them out there that really have an interest in making something that people can use.”

Thompson said the committee was very receptive and was more than happy to help the Trailblazers, as evidenced by the following meeting with the township engineer, and in turn the club was very appreciative of the warm welcome.

“There were excited to see us and they really made the kids feel at home, and really from my standpoint as a teacher, it’s really great to have an authentic learning experience like this to learn what your local government is like,” Thompson said.

According to Thompson, the group will meet throughout the rest of this school year, and then regroup when school starts again in the fall to move forward with planning the first trail. 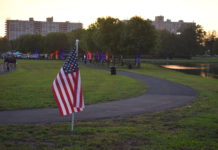