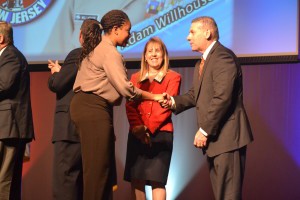 On Monday, May 11 in the Lenape Auditorium, 37 Lenape Regional High School District seniors were inaugurated into an elite group, the U.S. Armed Services.

There are about 2.2 million citizens active in the U.S. armed services. This equates to less than 1 percent of the country’s population, and year-by-year, this number continues to shrink.

As the class of 2015, seniors enjoy their final days before graduation, preparing to embark on a new chapter of their life that includes a new intimidating pressure — the unknown.

“Tonight’s students have the added pressure of being a part of something much bigger than they’ve ever been apart of before,” Superintendent of Schools Carol Birnbohm said. “Our students will not only be representing themselves, but they will be representing their school, their community, their family and now the United States of America.” 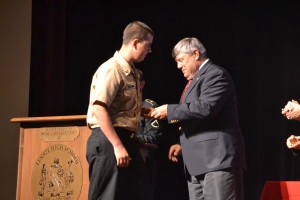 Schaeffer graduated from West Point and, before that, Lenape High School. However, Schaeffer also shared his ties with the other schools in the district.

Having a brother who graduated from Shawnee, attending Cherokee football camps as a kid and, though Seneca was not around in his day, he wrestled with assistant principal and athletic director Brad Bauer on the 1994 Lenape wrestling team.

Dedicating much of his life to the armed services in which he received a laundry list of decorations and traveled to many different countries, Schaeffer still refers to South Jersey as “home.”

From all the experiences he gathered throughout his time in the services, he stressed two points to remember as these young ROTC members head off to face the toughest 10 weeks of their lives.

“One, never quit, you have what it takes to succeed. And two, thank you, what an awesome choice you made to serve. You are America’s future,” Schaeffer said.

Some of these students will be the first in their respective families to take the military route, while others will be following in the footsteps of proud veteran family members who were also recognized for their services in the ceremony.

These loved ones played a big role in why a lot of the students got involved in their school’s ROTC programs with larger plans to someday join the services.

“I joined to protect my home, my family, my friends and get out there and try to make a difference in the world,” Eric Pry of Lenape High School said.

“I joined to keep my nation and keep my loved ones safe,” Patrick Byrne of Lenape High School said.

Zach Kincaid of Lenape High School took a different path that led him to where he is today.

As a child, Kincaid suffered a traumatic injury to his skull, leaving him with less than a 10 percent chance to live. After he was able to overcome these odds, he decided he would dedicate his life to his country.

“I technically shouldn’t have lived, so after surviving that experience, I feel that I need to spend the rest of my life trying to save others,” Kincaid said.

Unlike many of their friends who will soon be packing to leave for the Shore or college, this select group will be packing a much smaller bag consisting of the bare essentials and heading to basic training.

Basic training, or as many call it “boot camp,” is undoubtedly grueling, as Schaeffer assured, but he also guaranteed the everlasting memories and friendships these students will take with them afterward will make the entire process worthwhile.

“Dig deep, remember an ounce of discipline is worth a ton of regret, and keep going,” Schaeffer said.

The school district’s goal in holding the ceremony wasn’t just to honor military personnel, but to create a Lenape community where military alumni can return home.

These alumni stood for a powerful round of applause at the beginning of the ceremony and also took the stage to receive awards from the LRHSD Board of Education members and a selection of principals from the district.

“It’s nice for these students and their parents to see alumni from the district and get the chance to talk to them as they go off and really understand what a honorable thing it is that they are doing,” Chris Heilig, the director of programs and planning for the district, said.

This was the sixth annual Armed Services Ceremony the district has held, and though the number of alumni who come back has dwindled from the first ceremony, this does not jeopardize the future of this event.

“Even if there’s just one person to honor, we’re going to continue to do it because it’s important to honor such a noble cause,” Heilig said.