The Alice Paul Institute has announced the recipients of the 2015 Alice Paul Equality Awards. Honorees from the community include Lita Abele, president and CEO of U.S. Lumber Inc. in Woodbury Heights, Phoebe A. Haddon, chancellor of Rutgers University in Camden and Candida Toccia Seasock, founder and president of CTS Associates LLC in Philadelphia. In celebrating its 30th anniversary of its founding in 1985, the institute is honoring its founding board of directors, including Christine Borget of Vincentown, Judith Buckman of Mount Laurel, Barbara Irvine of Cinnaminson, Jean Perry of Moorestown, Janet Tegley of Savannah, Ga. and Patricia Williams of Haddonfield.

The awards, which will be presented at a gala dinner on Thursday, March 19 at 6 p.m., at The Westin in Mt. Laurel, honor individuals from any industry or field who capture the spirit of Alice Paul and as a consequence, directly or indirectly, continue her mission of advancing women’s equality in America. For ticket information, call (856) 231–1885 or visit www.alicepaul.org.

Abele, who came here from the Philippines as a young woman, is the owner of U.S. Lumber, the major supplier of lumber for New Jersey, Delaware, Maryland and Pennsylvania. She is active in community service organizations, serving on the board of Rowan College of Gloucester County Foundation and as secretary for the Girl Scouts of Central and Southern New Jersey.

As chancellor of Rutgers University-Camden, Haddon is responsible for the daily administration of an institution with more than 6,500 students in 39 undergraduate and 28 graduate programs, plus some 1,200 employees. Previously, Haddon served as dean of the University of Maryland Francis King Carey School of Law. She has written extensively on equality and access to education issues.

As a professional mentor, Seasock focuses on businesses that are interested in strategic growth. She focuses on targeted business development, strategic marketing, and fostering strong and long-term client relationships.

Borget, an elementary school teacher in Cinnaminson from 1969 to 2008, served on the Alice Paul Institute’s Board of Directors for many years. She held leadership positions in the local group of the New Jersey Education Association. She has also been active in the local chapter of the National Organization for Women and the International League for Peace and Freedom. Borget piloted the Institute’s “Meeting Alice” field trip program which now serves over 1000 students each year.

Buckman helped to organize the series of public programs and events in 1985 that honored Alice Paul’s 100th birthday. She was the founding chair of the Alice Paul Leadership Program in 1995, a program that today serves thousands of girls across the Delaware Valley. Buckman is the current president of South Jersey Now and works in the marketing department of Hill International.

Irvine served as volunteer president or board chair of the Alice Paul Institute for its first 16 years. She initiated and chaired the first national conference on the preservation of women’s history sites in 1994 and co-founded the National Collaborative for Women’s History Sites, which today serves more than 100 organizations and sites across the country. Irvine worked for the Heritage Philadelphia Program, a grant-making organization of funded by the Pew Charitable Trust and as executive director of the New Jersey Historic Trust.

Perry served on the Alice Paul Institute founding board of directors. She is a lifelong educator, trainer in the fields of history and gender equality, served as director of the Burlington County YWCA, Federal Woman’s Program manager for the Department of Army and developer and facilitator of customer service and management training for Moorestown Visiting Nurses. Perry is an adjunct instructor in history at Burlington County College.

Tegley served on the Alice Paul Institute founding board of directors. She has been involved in women’s rights during four careers as teacher, women’s program director, public relations consultant and television producer. For the past 20 years, Tegley was a television talk show producer where she strived to insure that women’s issues were a central part of her shows’ content.

Williams also served on the Alice Paul Institute’s founding board of directors. She has combined a legal career with community involvement, holding leadership positions in Haddonfield Child Care, Haddonfield Friends School, Cadbury Corporation and the Arts and Business Partnership of Southern New Jersey. She is currently on the Financial Oversight Working Group of Philadelphia Yearly Meeting of the Religious Society of Friends. 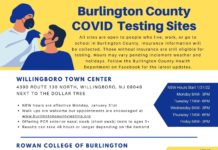