Eastern High School graduate English Gardner has a name that most won’t forget and the athletic ability that even fewer ever possess.

Careful, though, if you blink you may miss her.

Building on an impressive college career at the University of Oregon, Gardner is already building her legacy as a professional after competing at the IAAF World Championships in Moscow earlier this month.

She competed in two events, medaling in one and missing the bronze in another by three-tenths of a second.

Gardner ran the third leg on the United States women’s 4×100 meter relay that placed third with a time of 41.29. A disqualification of the second-place French team allowed the U.S. to take silver. If not for a shaky baton exchange, the Americans may have had a shot at the gold.

“We had a little mishap, a little mistake,” Gardner said. “You really can’t have a mistake on that stage against that level of competition.”

In the women’s 100 meter, Gardner dazzled the crowd by posting the fastest time of the day, 10.94, in the women’s 100-meter preliminaries. She was the fastest out of the blocks and it became clear she’d win even before the halfway point of the race.

In the 100 meter final, Gardner again led the field from the jump but faded to finish fourth with a time of 10.97. Despite not making the medal stand, she said she was not disappointed with the result.

“Certainly not disappointed, I’m truly blessed just to have been there,” Gardner said. “I had an absolutely incredible season, winning USA nationals which got me to Moscow.”

Earlier this summer, Gardner became the U.S. women’s champion in the 100 meters after sprinting to victory in a then world-leading time of 10.85 seconds. That win was a sign to everyone that she’d arrived and was a legitimate threat on any stage.

“I didn’t want to get to the big show and not perform. I wanted to get under the lights and run well. I showed myself that I’m capable of doing this,” Gardner said.

Gardner’s rise to prominence began while running for the Ducks at Oregon. In 2011, she set the American Junior Record in the 100 meters at 11.03 while winning the PAC-10 Championship.

Associate Director of Athletic Communications at Oregon Greg Walker said the university was sad to see her turn pro.

“We’re excited for English, obviously, but we loved having her here. She was amazing her entire time at the university,” Walker said. “It’s great to see her doing so well.”

Her success at the next level is not a surprise to anyone who had the opportunity to watch her compete at Eastern.

Gardner won the 100 meter title and was second in the 200 in the Meet of Champions races as a freshman during the 2007 season, winning State Group IV championships in both events. She followed that effort in 2008 by repeating in the 100 but also taking the 200 as well. 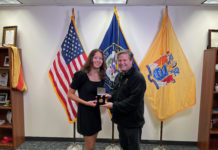 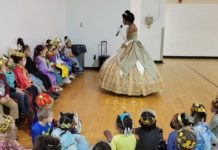