The budget was approved for $68.8 million.

According to Business Administrator Dennis Nettleton, the general fund tax levy is $2 million below the maximum allowable tax levy cap.

State aid will provide $13.5 million to the district. The net difference from state aid last year to this year was $2,188, with the biggest losses in transportation and equalization aid.

The proposed budget would have cost taxpayers approximately $80 per year for the average assessed home, which has since been reduced.

“The total tax levy has been reduced by $1.4 million since the February presentations. In February, the total tax levy was proected to be $57.6 million,” Nettleton said. “The approved amount is now $56.2 million. This represents an increase over the prior year of only 2.81 percent on the tax levy.”

“We took back some money that had been allocated by the insurance company, the insurance went down,” President of the Board of Education Sandy Student said.

According to Nettleton, the district was able to add an additional $193,645 of revenue from the insurance company.
“There were also retirements. We were also able to realize an increase in debt service and allocate some revenue from a full day kindergarten,” Student said.

The kindergarten classes the district offers are tuition only and added by need.

According to Superintendent of Schools John Scavelli, the combined total of all salaries and benefits accounts for 82.5 percent of the total anticipated general fund budget. Goals of the board include maintaining all staff positions, focusing on student achievement, increasing technology, enhancing staff professional development, continuing with the “green” initiative, including expanding solar panels to all district schools, and balancing the needs in respect to taxes.

As part of increasing technology, the school district will be introducing new initiatives.

According to Nettleton, those initiatives include a new student information system, replacement of 250 outdated classroom computers for fourth and fifth graders, the launch of a one-on-one initiative of approximately 534 devices with charging carts for the middle school starting with sixth grade, an additional 30 devices on eight carts, an additional 216 iPads for the primary school grades and new technology subscriptions for classrooms of cyber bullying programs, financial literacy and BrainPop.

“There is also a new policy encouraging children to bring their own tablets to school, something that never happened before,” Student said.

In other news, Ryan Haines and Kirsten Montenero, presidents of their respective halls, sat at the table with the board of education members.

“It was cool to have the kids there sitting with us. They were ready to vote and everything,” Student said.

The next meeting will be held Thursday, April 25 at 7 p.m. at Marlton Middle School located at 190 Tomlinson Mill Road. 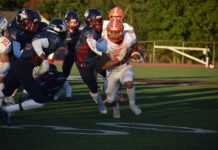