Gymnastics is not a sport that you may think of when you think about high school sports. That’s because, in New Jersey, a lot of schools don’t have a gymnastics team, and, if they do, it’s only a girls’ team.

“We are always scared that New Jersey may drop the girls’ teams, because they dropped the boys,” Dusty Carroll, Seneca gymnastics head coach, said. “But, in North Jersey, gymnastics is a very popular sport. I guess because those are wealthier areas.”

Carroll cites a variety of factors for why gymnastics is not offered in as many schools as other sports.

“This is an expensive sport to do, and with the economy it’s hard,” Carroll said. “For the schools, the liability involved, and I think it’s hard for them to find qualified coaches to teach it.”

The Seneca girls’ gymnastics team is a small, but competitive one. It is made up of seven girls; three seniors, a new junior, two sophomores and a freshman.

“We are doing pretty well,” Carroll said. “We are small team so it’s tough to win. But, our top three girls qualified for the sectional meets. This year will be the first year Seneca will be hosting the meets, so that’s exciting.”

Seneca has had a gymnastics team since it opened eight years ago. The conference that it belongs to includes the four district schools. Many of the girls who compete on the team have trained at Pinelands in Tabernacle or Wilmer in Medford and Mount Laurel.

“A lot of the girls that try out are relatively athletic girls that are looking to do a new sport in their freshman year,” Carroll said. “Those who don’t catch on don’t come back. We have one or two new girls a year that we can get competitive and get up to varsity level. To get to championship level, they would have to practice all year-round.”

To get the girls ready to compete, Carroll goes over a series of exercises and drills with the team.

“We start our practices with aerobics and gymnastics, and we end with 20 to 30 minutes of conditioning,” Carroll said. “During practice, we will do all four events, but the girls rotate. We evaluate their routines and do drills focusing on the routines to better them. We take a skill and turn it into a higher skill with more value.”

While there may not be that many high schools in the state that offer gymnastics, there are still many colleges around the country that do.

“A lot of colleges offer gymnastics at a variety of levels,” Carroll said. “There are colleges that have club teams, and then there are some that NCAA teams. To get a scholarship to college for gymnastics, you would most likely have to be a state champion. I am looking at colleges now because I have one senior on the team that wants to compete at the college level.” 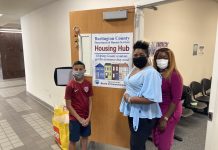