On Wednesday, June 22, 2011, the first full day of summer, all Burlington County and judiciary employees will be asked to turn off all electronic equipment, including computers, and lights not being used during employee lunch times. They will also be asked to turn off the lights, printers and other electronic devices in their office at the end of each day.

“We are hoping that this practice will continue throughout the summer and eventually become a habit for all county employees all year long,” Freeholder Director Bruce Garganio said. “By having a kick off event on the first full day of summer, we are acknowledging that the summer months are the most difficult with energy consumption and showing our residents how conservation can begin with small steps that add up to so much.”

The Big Turn Off idea originated in the Courts Green Committee, which is charged with identifying, advancing and promoting strategies, policies and practices within the Vicinage’s operations aimed at minimizing negative environmental impact and maximizing environmentally responsible behaviors.

“The committee explores ways to save energy and money as well as bring awareness to simple behavior changes such as turning off lights, computers and printers,” Judge Jeanne T. Covert, chair of the Green Committee said. “We hope to continue our commitment to think green by partnering with the County on future conservation efforts,” Covert said.

Green practices have been ongoing with both the Courts and the County. Both organizations have incorporated earth-friendly standards such as recycling bins for paper, glass, plastics, and aluminum; encouraging employees to print double-sided and do work electronically when possible; and utilizing recycled office supplies when applicable.

Old computer parts and components are reused, redistributed and recycled. Many employees also participate in various community-based green initiatives, including a number of park and river cleanups.

The Court employees recycle all copier and printer toner cartridges directly with suppliers so that they can be refilled and reused. They have installed flat panel energy efficient screens in courtrooms replacing the large tubed televisions that use much more energy and are much more costly.

The Courts also have instituted a videoconferencing policy that allows employees to communicate electronically with Trenton and other vicinages for meetings rather than driving to the meetings, which reduces carbon emissions.

“Our collective efforts to encourage responsible usage of resources will be a success if it leads us to consider ways to reduce our environmental footprint not only on June 22nd, but every day,” Bookbinder said.

Freeholders recently awarded a contract to EMSA Solar LLC of Parlin, NJ, for another major element of the County’s green energy plan, the construction of a mounted solar panel array on the grounds adjacent to the Engineering facility on Route 38 in Mount Laurel. Once in place and operating, the solar panel array is expected to generate enough electricity for the engineering and highway offices and garages on the site.

A grant-funded energy audit performed earlier this year by Concord Engineering of Voorhees identified equipment at the Mount Holly complex in the Administration Building, Courts Facility, and Detention Center that could — and should — be removed and replaced, including HVAC components such as boilers and chillers that have outlived their usefulness. The energy savings upgrades will reduce the utility costs for these three County buildings by approximately 10 percent on an annual basis.

“These steps to decrease electricity usage will not only reduce county energy bills, and in turn require less taxpayer dollars, but will also establish a pattern of energy conscious behaviors countywide,” Garganio said.

Freeholders are also collaborating with the Burlington County Bridge Commission in the implementation of a Greenbacks-To-Go-Green program, to assist towns in securing grants for energy audits, to develop energy savings plans, and to finance upgrades.

At last count, 64 municipalities, school districts, and utility authorities were in the process of pursuing alternative energy improvements through the Greenbacks program. Typically, these include improvements to lighting systems, motion sensors, hot water systems, windows and doors, and HVAC systems.

Shamong author stresses saving the Earth with her puggle, Bernie 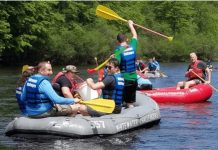 For 44 years, Shamong Boy Scouts have served the community 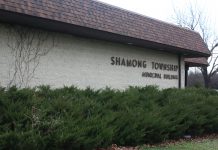 Shamong to receive more than $600k from American Rescue Plan