By ROBERT LINNEHAN | The Haddonfield Sun
Three seats are expiring on the Board of Education this year and five candidates have filed to run for re-election.
Christopher J. Basner and David Raymond will challenge incumbent candidates Steve Weinstein, Cheryl Laney and Joe Ehrhardt, according to Business Administrator Andy Hall. Residents will cast their votes for the candidates and decide the fate of the 2010–2011 budget at the Tuesday, April 20 election.
Resident Herb Hess submitted a petition to run and it was approved, but he officially withdrew from the election on March 5, citing “time constraints,” officials said.
Neither Basner nor Raymond has ever run for a seat on the Board of Education.
The 2010–2011 budget will also be decided during the election. As of last week, the Board of Education’s finance committee was proposing an increase of 2.5 percent increase in the school tax levy. It would raise the average assessed home’s tax bill by about $174.
For additional information, visit Haddonfield.k12.nj.us. 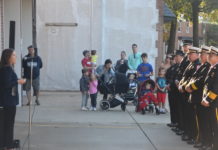